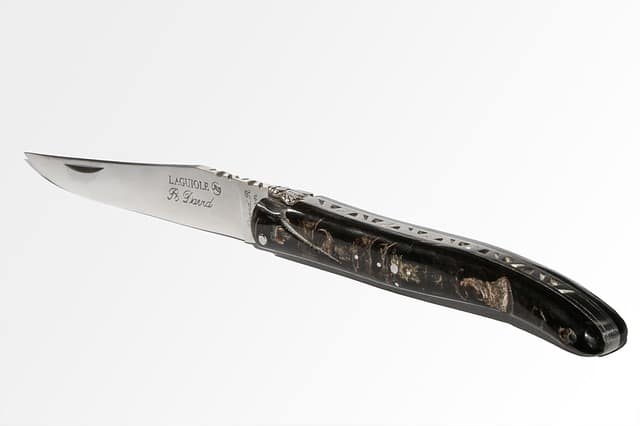 Every pocket knife seems to have the same short, straight-edged blade tucked into a solid plastic handle. Thankfully, there are some ambitious choices out there, such as the Laguiole pocket knife.

Whether it's using a stonewashed steel blade or ceramic handles, some pocket knife manufacturers are known for style as much as for utility.

I wish I could say that every knife has something unique going for it, but that's not the case with pocket knives. Most are boring, if practical.

But why not treat yourself to something that is both useful as a knife and has a bit of personality to it?

Often with blade manufacturers, you need to choose something with a bit of

Quick Navigation
All About the Laguiole Pocket Knife
Details and specifications
Outdoor use
Strengths and weaknesses
Pricing and warranty
Customer reviews
How We Reviewed
How It Compares to Other Pocket Knives
KATSU Camping Pocket Folding Japanese Knife
Gerber Hinderer Rescue Knife
Case Ebony Mako Pocket Knife
Should You Buy a Laguiole Pocket Knife?

All About the Laguiole Pocket Knife 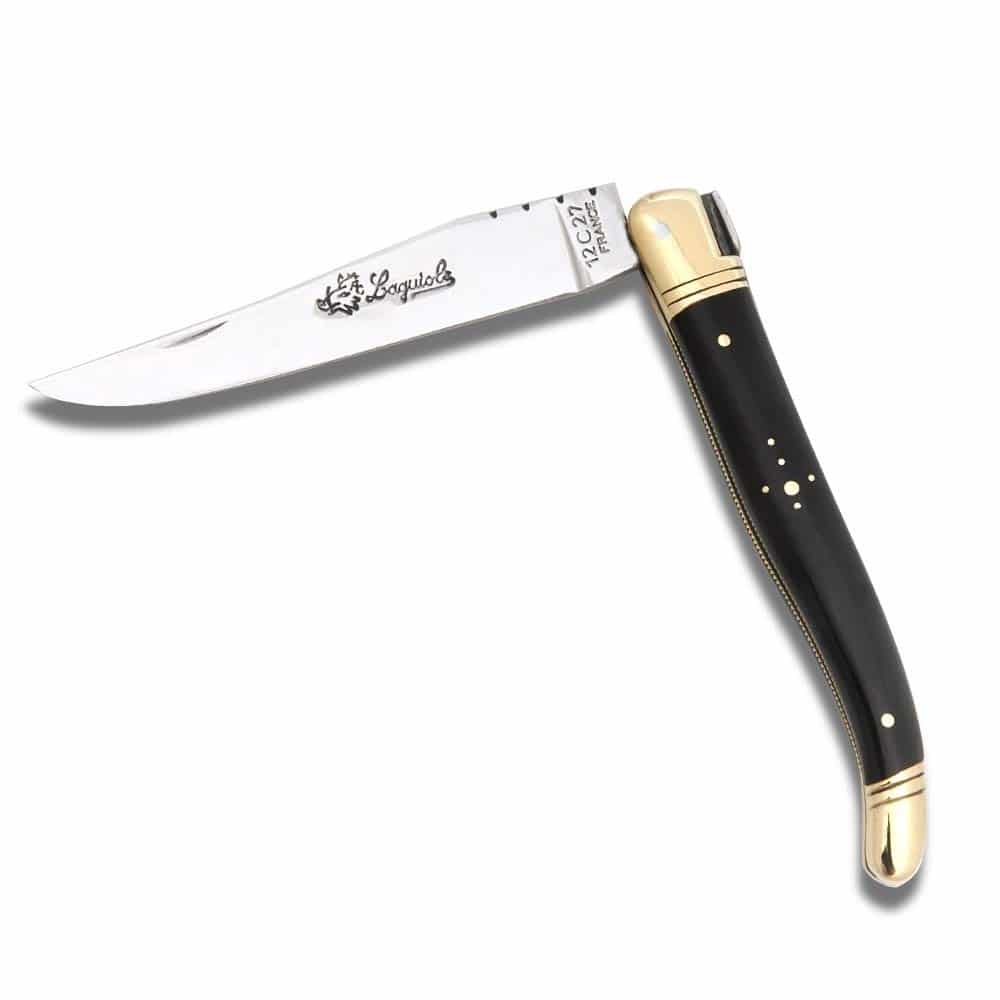 Laguiole is a French brand, but it's more than just a brand. Laguiole is a type of knife that comes from the village of Laguiole in the Thiers region of France.

Like how winemakers name their wine after the region where the grapes are from, knives in France have distinctive looks and build depending on from where they hail.

Thiers is the ancient capital of blade-making in France. Roman short swords and medieval claymores had a home in this area.

Napolean furnished sabers for his cavalry from the expert blacksmiths of Thiers. That tradition carries on with Laguiole pocket knives.

Laguiole knives, then, are the shape of a knife rather than a brand. These knives are slim and long. They are also curvy and sinuous. The Laguiole Actiforge company is famed for producing some of the best Laguiole knives on the market today.

Since 1820, Laguiole Knife has given the world their version of this French pocket knife, along with table cutlery and cooking knives. The Laguiole pocket knife is one of their best sellers.

When looking at the Laguiole pocket knife, the first thing you need to know is that there are a lot of counterfeits out there.

It's not only the shape that makes a Laguiole knife, but also the materials used, the forging process, and the fact that the manufacturer crafted it in the Thiers region. 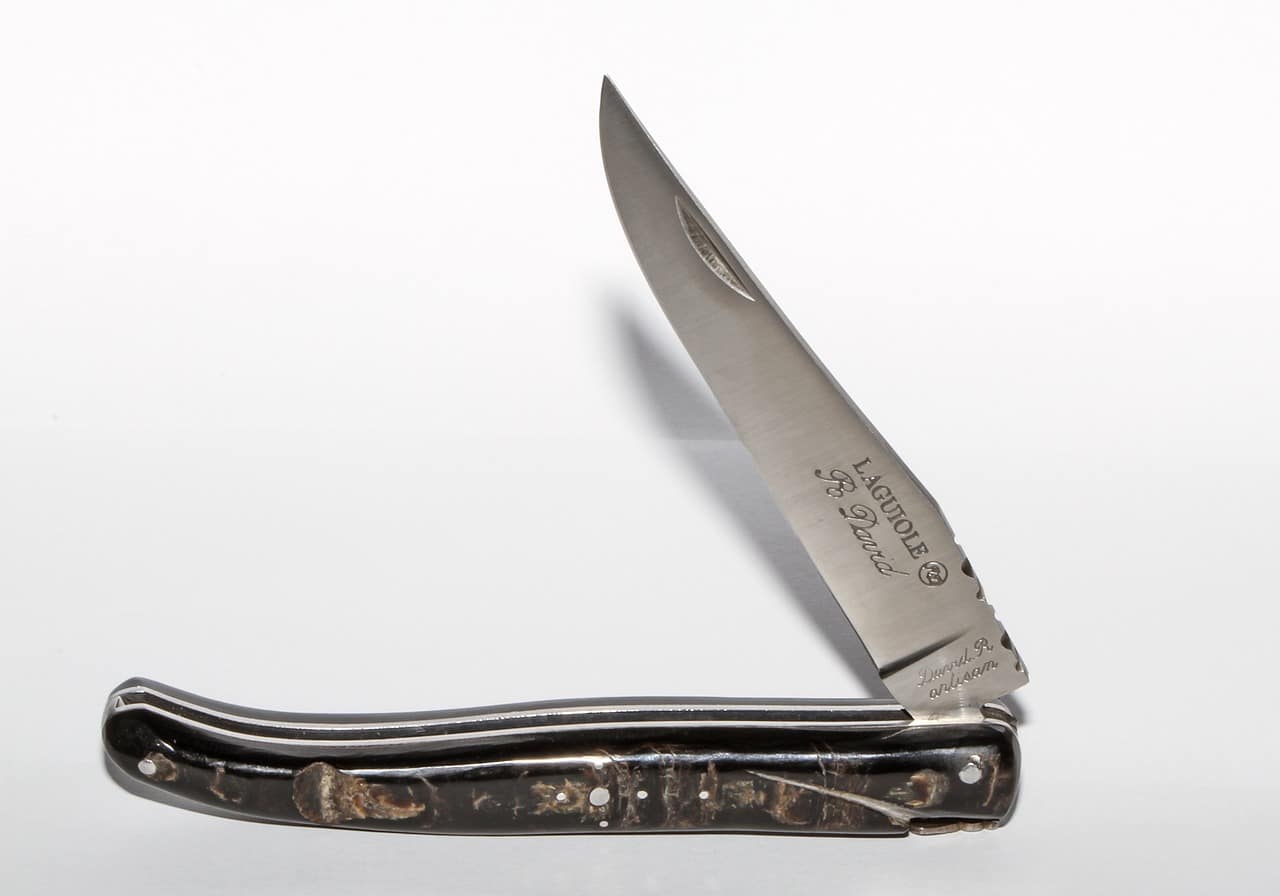 If it the manufacturer created the knife in a factory in China, then it's not a Laguiole knife regardless of how it looks and feels.

There are specific materials and processes used in making these exquisite knives, and only the master knife-makers of Thiers know the secret.

Every Laguiole blade is made by hand by one person. This person is an experienced journeyman who has learned the craft passed down through the generations from master to apprentice.

The blade itself is made of Damascus steel and silver, and the back of the blade is precision-filed to give it balance and beauty.

When you look at a Laguiole pocket knife, you are able to see the work of the individual craftsman. In this way, no two Laguiole knives are alike.

Although a Laguiole pocket knife blade is Damascus steel, the handle can be from anything. There are ebony handles, olive wood handles, and blonde horn handles.

You can find expensive tent. Like the blade, the handle is put together by the same craftsman responsible for the entire knife. Also, there is no lock inside the handle. Instead, a slip-joint spring keeps the blade in place when it's open.

Given that the Laguiole pocket knife is a beautiful work of art, designed to express individual aesthetic rather than rugged utility, how does it perform in the outdoors?

We turned to backpacker.com to see what their thoughts were after taking a Laguiole pocket knife out on a trek along the Appalachian Trail in Virginia. The reviewer praised the thinness of the blade for scraping dirt off his stove's gas canister nozzle, and the knife easily whittled tent pegs.

Best of all, he found the knife a breeze to use when slicing food. All in all, the Laguiole pocket knife performed very well in the outdoors, although he did say that the blade changed colors after his trip.

Every Laguiole pocket knife is a genuine work of art. That said, they aren't perfect, and we have to keep in mind that what we're looking for is a knife which can withstand outdoor use.

We have concerns about the thinness of the blade, and the lack of a locking mechanism is a serious safety concern. If you're using it in the rain or snow, it could close on your hand.

Also, the joint where the blade joins the handle may not be strong enough to survive serious outdoor hacking.

You can expect to pay between $100 and $400 for a genuine Laguiole pocket knife. If you find a "Laguiole" knife for $30 or $50, then we can guarantee that it's a counterfeit.

Another great thing about a genuine Laguiole pocket knife is that it comes with a lifetime warranty. You won't get this from a cheap knockoff.

Because there are several different brands of Laguiole pocket knife, getting one review rating is impossible. Instead, we looked at Laguiole Actiforge reviews. Customers on Amazon gave the knife 5.0 out of 5.0 stars.

However, only four people have reviewed it, so that is subject to change. Everyone who bought it praised the beauty of their Laguiole pocket knife.

They also loved the craftsmanship that went into their knives. There were no complaints from customers about this knife.

The first thing we did when reviewing the Laguiole pocket knife was to research all we could about Laguiole knives.

There are several companies in Laguiole producing Laguiole pocket knives, but the most famous one is Laguiole Knife Co, or simply just "Laguiole."

This is the one we chose to review as its the most likely brand you'll find when looking for a Laguiole pocket knife.

After learning about these knives, we took a look at their makeup, their prices, and what other customers on Amazon had to say about them.

We read through quite a few Amazon customer reviews. That gave us a good idea of how well a Laguiole pocket knife holds up in the real world.

Finally, we put the Laguiole pocket knife up against some competition. We compared it to three other pocket knives, all of which you would use when camping, hiking, or fishing.

We wanted to see if the Laguiole pocket knife is capable of being an outdoor knife, or if it was better to go with something less sexy, but hardier.

How It Compares to Other Pocket Knives

To help us determine whether or not a Laguiole pocket knife is the right knife for you to bring camping, we compared it to three outdoor-purpose folding pocket knives.

We wanted to see if the slender Laguiole could hack through a branch the same way that a KATSU camping knife could, or cut a rope like a Gerber Hinderer rescue knife. 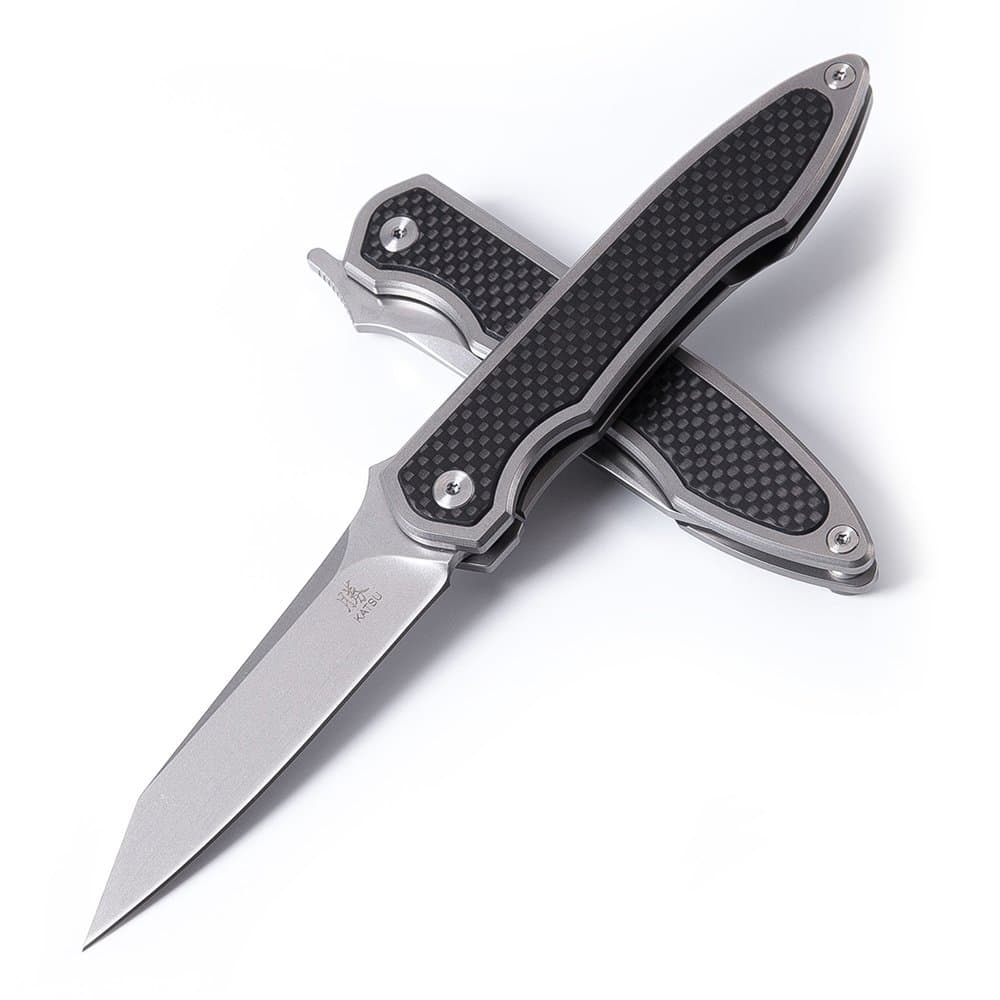 When it comes to quality outdoor pocket knives, nothing beats the KATSU camping knife for durability. This Japanese knife is a favorite among serious campers.

Its titanium blade can slice through anything: tree branches, twine, steak. The stonewashed blade keeps incredibly sharp. You can order a drop point or a razor blade, but for camping, we suggest the drop point.

You can do so much more with it. The handle on this awesome knife uses a ball-bearing pressure system to spring the blade open.

Meanwhile, a full stop lock keeps the blade locked in place during use, so it won't fold and cut your hand. You can buy a KATSU camping knife for between $90 and $110.

Customers on Amazon gave this knife a respectable 4.5 out of 5.0 stars. Almost everyone raved about how perfectly centered the blade is. It's is incredibly sharp, and customers used it many times before they had to sharpen it.

A few people complained that the release is slow, and sometimes the blade has to be manually opened instead of springing open. 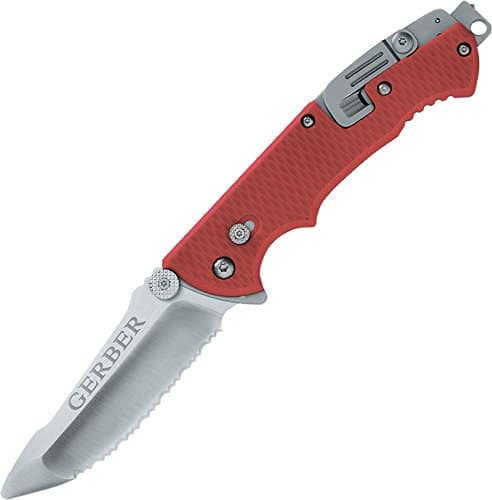 Next up in our comparison is the Gerber Hinderer rescue knife. This stubby little knife is a mean-looking tool that you can use to cut seatbelts, bust out car windows, and hack through rope and canvas harnesses.

Although it is technically a rescue knife, the Gerber Hinderer is also a great camping knife. If it can pop a car window, it can easily poke a steak on the grill.

It features a 3.5-inch carbon steel serrated blade with a stop lock to hold it in place. It also includes a seatbelt cutter and a tension-loaded spring action that snaps the blade open in a snap.

Expect to pay between $100 and $125 for this knife. On Amazon, customers gave it 4.8 out of 5.0 stars. Everyone said it was a solid knife that felt sturdy in hand. Most people loved how heavy-duty it is.

Many of the reviewers were police officers and firefighters and they all said they rely on this knife. The only complaints were that it was a little too big to carry in the pocket easily. 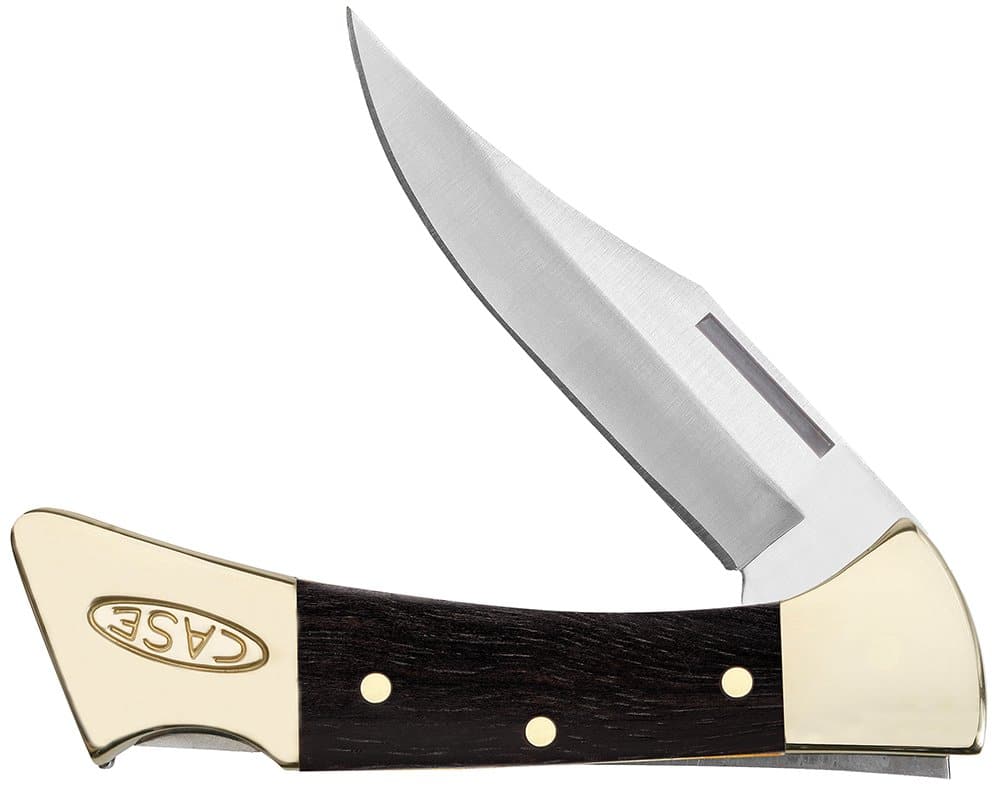 Finally, we have the Case Ebony Mako pocket knife. This knife is your classic outdoor folding pocket knife. It has a super-sharp stainless steel blade measuring 3.25-inches, and a beautiful yet rugged ebony handle.

There is a polished locking mechanism that doesn't rust, so the blade stays open no matter what you're doing to it. You can easily cut fishing line or sharpen a marshmallow stick with this knife.

This knife is also handy around the home, making it the perfect utility knife. It costs between $75 and $100 and comes with a lifetime warranty.

Customers gave it 4.7 out of 5.0 stars on Amazon. Most people loved how sharp the blade is. They found the knife overall to be very sturdy and strong.

A few people had complaints that it loses its edge too quickly, and requires constant sharpening. Other than that, people loved this knife.

Should You Buy a Laguiole Pocket Knife?

With such a bevy of fantastic pocket knives available, should you get yourself a Laguiole pocket knife?

If you want a utility knife that is able to handle regular camping use, such as whittling wood, slicing food, cutting twine, and other light uses, then the Laguiole pocket knife is a fine addition to anyone's collection.

On the other hand, if you plan on using a knife for more intensive work, such as hacking through saplings or digging holes, then you may want to go with a sturdier workhorse, such as the KATSU camping knife or the Case Ebony Mako pocket knife.

And then there's the issue of style. Some people don't want a flashy knife that will draw attention to them. The Laguiole pocket knife certainly will turn heads. There isn't a sexier knife on the market.

If you want a unique knife and only plan on light utility work around the campsite, then a Laguiole pocket knife is the best one for you! 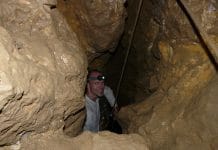 Boruit Headlamp Review: Why This Outdoor Gear Is a Must Have 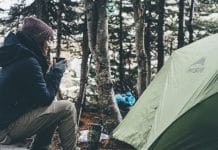 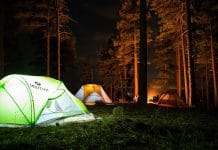