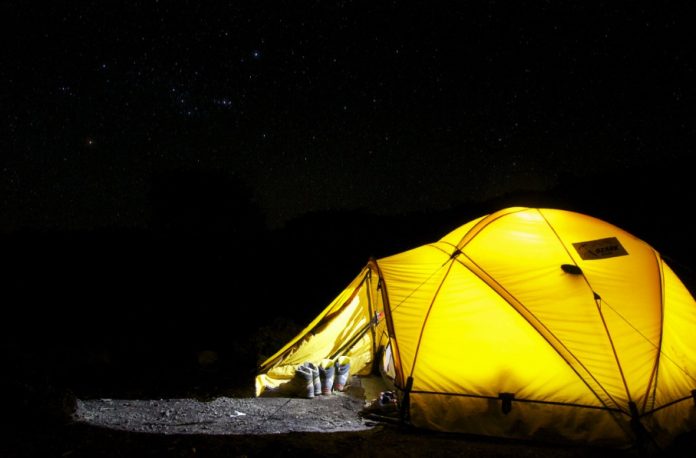 Quick Navigation
All About E-Z Up Tents
The Camping Cube
The Wedge
How We Reviewed
What Sets E-Z Up Tents Apart?
What others had to say
E-Z Up Tent Pros and Cons
Pros
Cons
How They Stack up to Others
Coleman Sundome pop-up tent
Night Cat Easy Instant pop-up tent
Amazon Basics Tent
Should You Buy?

Are you looking for a tent for you or your family? Are you tired of fighting with poles and rain flys and pegs in the dark? Perhaps an E-Z Up tent is for you. With a couple of clicks and pulls, these tents pop open, ready for you to move in. Now all you need to do is blow up your air mattress and apply mosquito repellent.

If you’re anything like me, then you’ve probably had your share of tent set-up nightmares. I have a habit of being the last to show up to a campsite. And although I’ve become proficient at stumbling around in the dark, trying to set up my tent, it doesn’t mean I like it. I’ve had springy poles wack me in the head, and once I even covered the door with the rain fly, but couldn’t figure it out for a long time. The door just disappeared! We here at Camp Longer highly recommend not losing your tent door.

Which is why you might want to consider a pop-up like the E-Z Up tent. Simply flip your tent open and then laugh at your poor friends from the warmth of the fire as they stumble around in the dark. But, will it suit all your needs, or is it just another gimmick?

All About E-Z Up Tents

The E-Z Up tent can trace its roots back to the Colorado River in 1983. That’s when the company’s 21-year old founder found himself trying to set up a canopy with missing parts. He came up with the idea of a tent that had no parts, and just easily sprung open. A year later, he partnered with a California warehouse owner, and E-Z Up was born.

Today, E-Z Up is a favorite with corporate event planners. Because they make high-quality shelters for food vendors, large event canopies, and sun shelters, you’ll find E-Z Up tents at most outdoor events. E-Z Up is often misspelled as “ez up”, but most people know what it is regardless of spelling. And while the company doesn’t have too many tents, the ones it does have are unique. They should meet the needs of any camper.

First is one of the most unique E-Z Up tents we’ve ever seen. As its name suggests, the Camping Cube is a cube-shaped tent. This requires you to have an E-Z Up straight-legged canopy, as the tent itself consists only of the walls and floor.

The box is 6.5 feet tall and comes equipped with a pet portal so your four-legged friend can get in and out. This funky canvas house has 541 cubic feet of space inside, making it one of the largest tents we’ve seen.

In addition, because of its tall height, there is exceptional airflow in this tent. Never again will you wake up inside a stifling furnace at 10:00 in the morning. Now you can keep that fresh night chill in your tent all morning. And because it’s an E-Z Up tent, it sets up and breaks down in minutes. 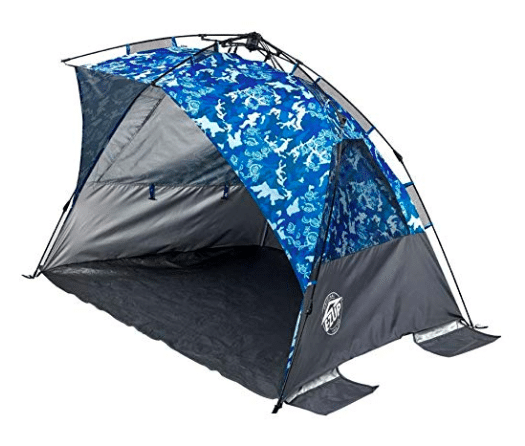 Next is E-Z Up’s second tent in their two-tent lineup. The Wedge resembles a croissant. It is lightweight, weighing only seven pounds folded up. This is a great choice for hikers and those on portage. Because it’s an E-Z Up tent, it takes just one pull to set up. The tent has three walls and a collapsible fly which becomes a fourth wall and door. The fabric is coated with a special UV spray which blocks the sun’s rays, yet it meets fire resistance standards.

There isn’t much room in this tent, and it’s not really a tent in the traditional sense. Instead, it’s meant for keeping out of the sun during sporting events or at the beach. However, because you can lower the fly to create a fourth wall, it can double as a tent. We wouldn’t suggest spending an entire weekend using the Wedge for camping, but for a day trip, it’s handy. For this reason, we have excluded the Wedge from our review.

To make this a fair and unbiased review of the E-Z Up tents, we checked out lots of sources. First, we visited E-Z Up’s website to learn about the company and see what they had to say about their own products. Next, we went to see what the professionals over at Digital Trends thought of the Camping Cube. Then we read through Amazon customer reviews. Because we trust reviews written by real people, we read a lot and were able to get a good idea of how this E-Z Up tent performs in the real world.

Finally, we compared the E-Z Up tent to several tents from the competition to see how they stack up.

What Sets E-Z Up Tents Apart?

The next thing that sets E-Z Up tents apart from the others is the simplicity of the E-Z Up system. These tents have a single knob that you pull and you have an entire tent ready to go. Most of the other pop-up tents require three or more mechanical motions to get them set up, and none of them break down as easily as an E-Z Up tent. So if you’re lazy and just want to camp, without the hassle of actually getting your camp set up, than E-Z Up has the competition beat.

What others had to say

None of that makes a difference if people don’t like these tents. Thankfully there’s the internet, and when we’re not camping we’re sitting at our computers, scouring the web for the best products for you. In order to learn more about the quality of the E-Z Up Camping Cube, we turned to the good folks over at Digital Trends.

Digital Trends said of the Camping Cube, “It turns camping into glamping.” Being a tech-heavy review site, they were pleased to no end with the power pockets in the tent that allow extension cords to be run inside without letting in rain or bugs, so you can charge your phone or tablet. All in all, Digital Trends was pleased with the Camping Cube.

Meanwhile, over at Amazon, customers gave the Camping Cube 3.9 out of 5 stars. Everyone loved the spacious interior of the tent. Also, people commented that this tent lasts for years with normal wear and tear, and it looks really cool. One issue a few people had was with the fact that they needed to buy the E-Z Up roof separately. However, if you already have one, this is a great add-on.

E-Z Up Tent Pros and Cons

How They Stack up to Others

So if the E-Z Up Camping Cube tent is spacious and unique, how well does it compare to the other brands? Can a Coleman pop-up tent offer the same roomy comfort as an E-Z Up tent? Could you save money on a Chinese-made tent from Amazon and get the same ease of use? One thing we are certain of is that all of the competition offers a roof with their tent.

First up in our comparison is a four-person tent from the king of camping: Coleman. This Chicago company has equipped campers since 1902. They are known for practical, rugged products, which is what you want when you’re camping. The Sundome pop-up tent is easy to set up. You’ll have it up within 10 minutes, although it will take some practice before you figure which cord to pull and when. Like regular tents, it still requires messing around with rope-poles for support and to attach the fly. This tent is spacious, with nearly five feet of height in the center. Also, there’s nine by eleven feet of space for you to stretch out in when laying down.

Customers on Amazon gave it 4.4 out of 5 stars. Many people wrote that the tent was high-quality and tough. It set up fairly easy and the inclusion of a floor vent kept it cool during the day. A few people complained that the stakes are weak and snap easily.

Next up is the Easy Instant pop-up tent from Night Cat. One thing that’s unique about the Night Cat is that it uses hydraulic mechanisms to set your tent up. You can just hit a button and stand back. The tent will slowly unfold and stand upright all by itself. Although we couldn’t find out who Night Cat was, after deep diving through Google we realized that they sell only on Amazon. We suspect they are a Chinese manufacturer of a different name and Night Cat is simply a brand name. This tent is roomy and able to accommodate up to four people. It is waterproofed and the company claims the fabric is inspected for needle holes. Also, inside you’ll find 7 by 6.5 feet of space.

Customers on Amazon rated this tent 3.0 out of 5 stars. Everyone said that the tent was incredibly easy to set up. A press of the button and thirty seconds later there’s a full tent. Also, many people reported that the tent stayed dry during rainstorms. One complaint that a few people had was that the tent is very heavy. Also, it gets really hot and humid inside.

Because no other pop-up tent can offer the space of the E-Z Up tent, we turned to regular manual tents. What if you wanted to save some money and go with a more traditional tent? Maybe you don’t want a pop-up tent after all? In this case, Amazon Basics has a tent you may be interested in. The Amazon Basics eight-person family tent is 100-percent polyester. There are cool-air ports and vents to keep air flowing through the tent, which is something you’ll want with eight people inside. It has a six-foot center height, which is almost as tall as the Camping Cube. Meanwhile, its 15 feet long and 9 feet wide. This is a huge tent.

Amazon customers liked this tent, giving it 4.0 out of 5 stars. Customers praised the spacious interior, and many of them wrote that it was a fairly simple tent to set up, with only a few shock cord poles to fight with. One person wrote that they had two double inflatable beds and two twin inflatable beds, plus all their clothing, and there was still room! Unfortunately, a few people said that the rain fly isn’t large enough, and rain gets in under it and into the tent.

The E-Z Up tent we looked at is one of the coolest-looking tents we’ve ever seen. It’s a giant cube with windows, doors, and even a doggy-door. With a few extension cords snaking out of it, it looks seriously modern. We loved the spaciousness, and this tent received great reviews from professional reviewers and actual customers alike. What we didn’t like was the price and the fact that we need to buy the roof separately.

If you want a large tent, we recommend going with the Amazon Basics tent. Even though it’s not a pop-up, it has more floor space than the E-Z Up tent. Just remember to put up your own rain fly to keep the rain off the top. If you want a true pop-up tent, the Coleman pop-up tent isn’t a bad choice, but it’s nearly the same price as the E-Z Up tent. For that reason, when asked if you should buy an E-Z Up tent, we say yes! 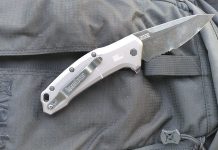 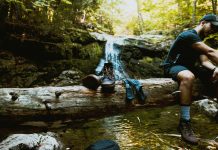 Vasque Hiking Boots Review: Are These the Best Boots for You? 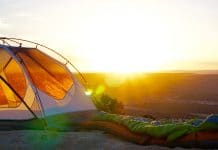 The Eureka Tent: Comfort For The Great Outdoors